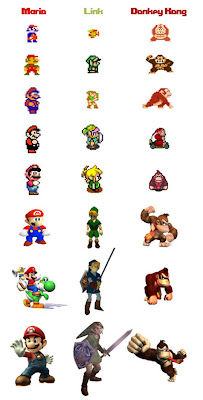 i found this cool little evolution illustration on gizmodo.com. it’s pretty cool to see the evolution from pixel art to 3d. it brought back so many memories of my childhood. some of you may remember these games… some of you may have never played them at all.

for those of you who don’t know who these characters are, they originated all the way back past the first nintendo in the 80’s. i remember the when i got my first nintendo. it was a birthday gift from my dad, and he gave me a tv as well. i didn’t ask for anything except for mario and nintendo. then when the super-nintendo came out, vinny was the first kid on my block to pick one up. i was hypnotized by the graphics and i couldn’t believe how high they raised the bar each evolution.

and today, i play halo 3 with strangers online… and i love the the experience (except the cost of online gaming aka xbox live!). the funny thing is that most of the kids that i play with today probably never touched the original nintendo, let alone a super-nintendo. i’m starting to feel a little old… *sigh* even my girlfriend doesn’t acknowledge the existence of final fantasy 1, 2 or 3… which were CLASSICS!! (pssst, either way, she’s still hot b/c she loves the rest of them…)

so how are the games in comparison? i haven’t had a chance to play any donkey kong games, but from what i’ve observed… nintendo is only releasing crap donkey kong, where you play a drum or something. it looks pretty lame. on the other hand, both mario and link have received ratings above 9.5 of 10 across the board on the wii. does it live up to the expectation? absolutely.

pros:
â€¢ graphics are extremely impressive for the wii
â€¢ the game play is well integrated with the wii controllers
â€¢ the mini games are short, which is nice.
â€¢ there are lots of levels of easy, difficult and everything between
â€¢ memorable boards, characters, story, and boss fights
â€¢Â you can even play in two dimensions, like the original mario
â€¢ unique experience

cons:
â€¢ the controls and camera view get funky at times
â€¢ you can get dizzy easily
â€¢ the music isn’t memorable like the original mario’s
â€¢ it’s missing additional characters to play with. mario is cool, but it’s much more fun with yoshi

this is the new zelda. i haven’t gotten too far on it yet, but it’s kick ass. again, it’s another platform game that really adds huge value to the gaming experience of wii, as well to the brand equity. this is one of those games that makes nintendo what it is today.

pros:
â€¢ graphics are great for wii. very imaginative and beautiful landscapes
â€¢Â game play is easy to pick up and learn
â€¢Â story is excellent, and engages you to be the hero
â€¢ music is great and memorable
â€¢ unique experience. i mean come on… you can go fishing!

cons:
â€¢ it requires patience to get into the story
â€¢ the game is very long. takes about 40-60 hours to finish
â€¢ linear gameplay
â€¢Â epona (the horse) is even harder to control