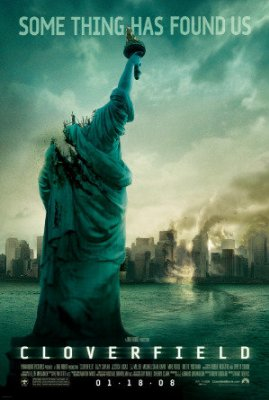 i’ve sat through some really bad movies, but this by far was one of the worst movies i’ve ever seen in my entire life. avoid it at all costs. despite some of the cool special effects, this was nothing more than a blair witch camera crew running around.

pros:
â€¢ i didn’t watch it in the theatre
â€¢ some of the CG effects were cool
â€¢ the campaign/ads that promoted the movie were actually well done (i got suckered into watching this P.O.S.)

cons:
â€¢ the plotline is weak
â€¢ the movie overused the hand held effect. we got the picture that it was supposed to be candid… and it got old after the first 2 minutes. you can’t watch this movie without vomiting or getting motion sickness.
â€¢ a 5 year old could have written, directed and filmed the same movie for half the budget

anyway, they had a cool promotional PR campaign. i must say the trailers were executed very nicely. they actually had a cool widget too (syndicated by my company). like i said, awesome marketing campaign… horrible movie. here’s the widget:

5 thoughts on “worst movie ever. cloverfield.”