words of wisdom from a multi-millionaire PT 2 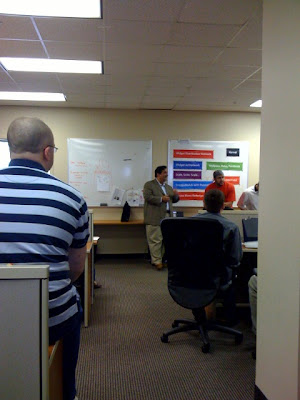 i wrote a blog a few months ago about ted leonsis, a multi-millionaire, vice chairman of AOL, owns the washington capitals, is a patent owner of AOL instant messenger, etc, etc. he’s also the chairman of clearspring, my company. i’ve bumped into him a couple times since i’ve worked at clearspring, and he seems to be a really down-to-earth cool guy.

he spoke to my company during lunch today about several things and hit some strong forward-thinking notesâ€”ideas i never really thought about at any other companies i’ve worked for. the ideas were empowering, motivating, and partially scary. here are the 3 underlying things that left a mark on me:

1. the team, product, and direction of clearspring is very similar to AOL when it was first born. he explained that our company was a team of deconstructionalists who realize that there is an inherit problem with the web. we are trying to figure out a way to make it easier for people to communicate with each other on different social networks. there are only about 10,000 people in the world who understand our vision, and only about 4000 in the US. he explained that we are in a very specific niche, and it’s a sweet spot b/c we’ve covered so much ground and we’re in the lead. this will be great one day if we go public and our stock options go through the roof. i remember when i first interviewed with this company and interviewed with Hooman, the CEO, and asked about his vision to go public. at the time, he answered that he’d like to, but it was not going to happen for a while. ironically, i’ve only been here for a little over 6 months, and we’ve grown quicklyâ€”there were only 40 people when i first joined, and now there are roughly 70 people… and going public really isn’t that far away if we keep up the growth.

2. the greater good in our product will be the key in our success. ultimately, our product needs to help people. ted explained that he knew AOL instant messenger was going to be a huge success when he sent out an IM to a friend. His friend didn’t have IM, so AOL sent his friend an email. the email said, “you have a message from Ted waiting for you, download AIM to get it”. he explained that the product allowed people to reach other people. if AOL had tried to market AIM and sell it to people as a software they needed to install, it would have never gotten anywhere. clearspring has a product that allows people to reach more people beyond AIM, beyond social networks, etc. we have a product that allowed people to become more connected and empowers the people. i can speak from first hand experienceâ€”because of our widgets, i can share and track my content. it’s incredible to be a part of what could potentially define the future of the web, like google. he describe successful companies like google to have “double bottom lines”. one bottom line is ultimately to make profit and be successful. the other bottom line, which is very difficult, is to give back power to the people and to have a vision beyond money and glory.

3. no bad days allowed. we can either spiral upwards and continue the momentum, or we can spiral downwards. the downward spiral comes from a bad day. a bad day becomes a bad week. a bad week becomes a bad month. a bad month becomes a bad quarter. a bad quarter becomes a bad year. the idea is not have any bad days, the same way professional sports teams try not to have bad games. in order to win the championship, you have to win games. in order to win our market, we have to make every day successful. how? we have to make sure that we ask ourselves if everything we do every day contributes to the main priorities of the company. the second thing is to question those daily things and priorities to make sure that we are heading in the right direction.

anyway, i was moved by his speech today at our company. it was refreshing, and really made me realize how i want to run my own company. he made alot of other great points, but these were the ones that sung to me. i learned that if you treat each person as a stakeholder of the company, they will go above and beyond to ensure the company reaches the promise land.

**UPDATE**
ted actually mentioned linked me in his blog!! WHOA! so cool!