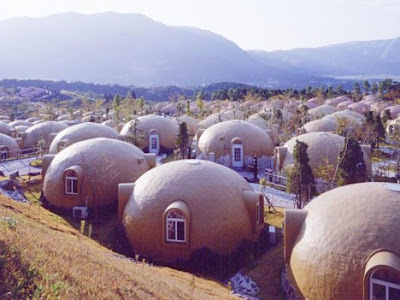 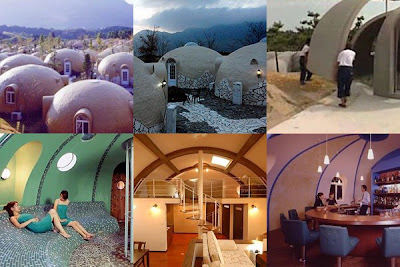 Styrofoam homes may sound like a recipient for disaster, but Japan Dome House Co., Ltd. thinks they’re the future. A future in which all of us will be hobbits or smurfs. Made with 7-inch-thick 100% expanded polystyrene foam modules, the company says that they don’t have the maintenance problems of wood or metal structures, and they are “highly resistant” to earthquakes, fires, and typhoons. Still, the 480 domes at Aso Farm Land resort village in Kyushu look like a suburban community on Mos Eisley’s outskirts or a world from Myst. The homes look huge. Each module is only 175 pounds, and they can be carried and assembled by a couple of people in a matter of hours. I don’t know how that is compatible with “typhoon resistant,” but since it has been approved by Japan’s safety-obsessed government, we would have to believe it’s true. Head to Pink Tentacle for more pictures and details.

saw this on engadget. pretty crazy concpt. never thought styrofoam could be used for homes. makes sense though. would you want to live in something like this?