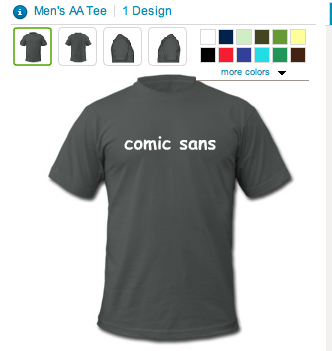 ah yes, comic sans, our most beloved typeface. so why make a tshirt? well, first off, i think it’s hilarious to celebrate it. you may already know that comic sans is a horrible typeface, but do you know why?

my hypothesis is that it’s become part of popular culture to hate it. i went to a design conference and the speaker asked the audience what the ugliest font in the world wasâ€”everyone quickly vocalized “comic sans” and laughed. honestly, i think there are more hideous typefaces (that are harder to read, overused, and abused by designers) than comic sans.

most people don’t even know why it’s called “comic sans”. well, if you know anything about typography, “sans” means “without”. really, the formal typeface should be called “comic sans serif”, which means “without serif”. examples of serif typefaces would be times, georgia, palatino. examples of san serif typefaces would be arial, helvetica, univers.

comic sans was actually designed by a typographer that simplified comic (the serif version). the san serif version of comic was designed to imitate handwriting for a comic book. the designer actually created several other typefaces that were in a handwritten style… appropriate for children’s books and of course, comics. the problem was that comic sans was a stock font in windows and was used to create signage, posters, and eventually made its way into logos. there’s even a website that’s called ban comic sans.

so if you really hate comic sans, why? if you don’t know, perhaps ask yourself if you’re just following a trend. yes, comic sans is not a respectable typeface… but then again, have you ever created a typeface? its actually much more challenging than you think. typography is extremely complex. To craft an alphabet, let alone numbers, symbols, kerning, and understanding typographic algorithms is quite a nightmare.

yes, this shirt will be a conversation starter b/c it’s absolutely hilarious… but i’m curious to see how many people really know what they’re talking about when they say they “hate” comic sans. i will be ordering my custom shirt this weekend. let me know if you want one too. ^__^

by the way, the typeface i detest the most in this world is cezanne. not because it’s hard to read. not because it’s i don’t like cezanne the painter. it’s because i worked with a designer in my former life that used it way too much. it was a default typeface for any project. i will never use cezanne ever again.