Electric Bike Tour around SF and Sausalito with Annie and Julia 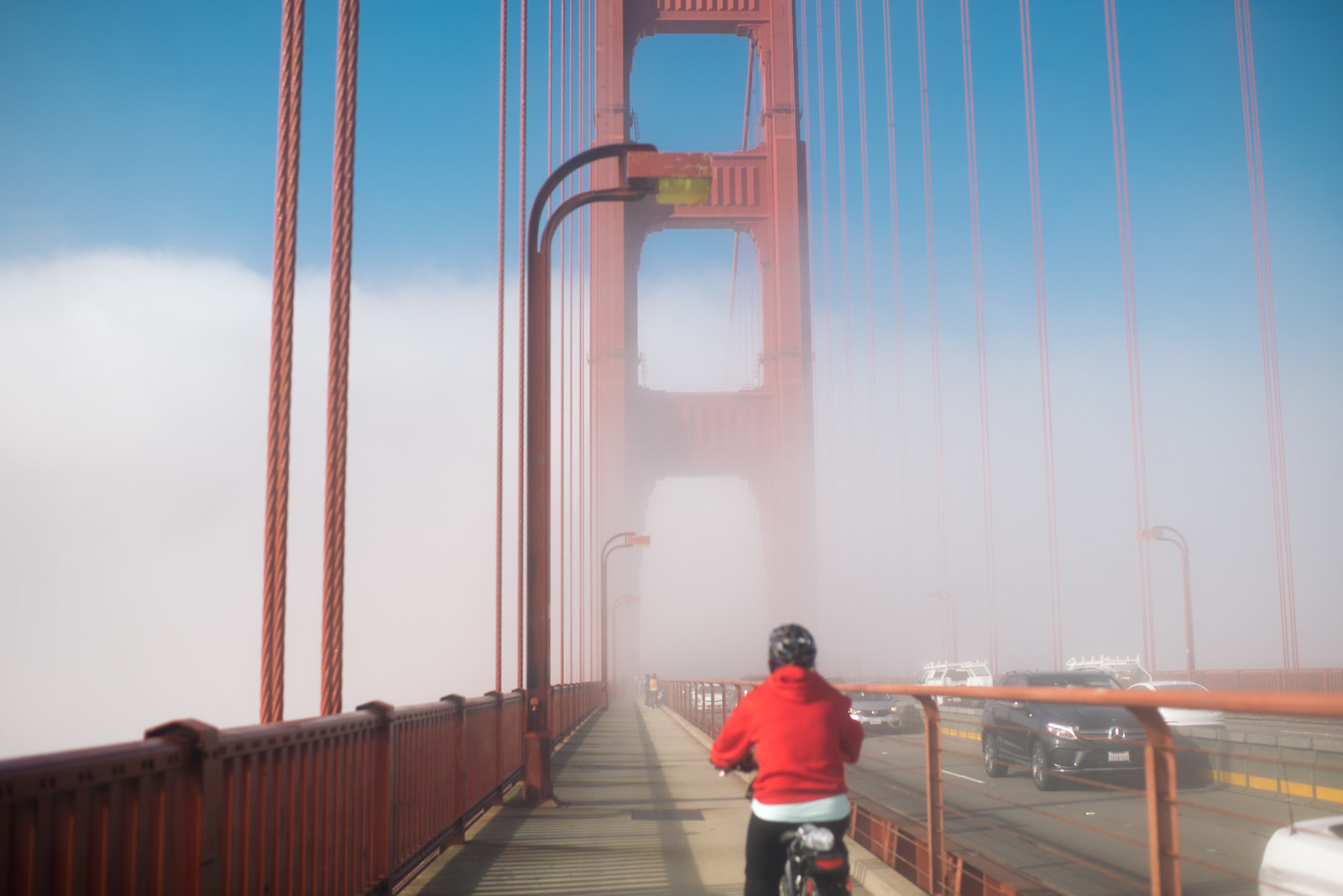 Riding across the Golden Gate Bridge, covered in fog.

Wow, so I am so behind on blogging. Like, I have photos from months ago that I haven’t shared. Anyway, I’ve gotta get better about posting more content more frequently.

Anyway, I wanted to share some photos of when Annie and Julia came to visit me in SF. I had tried out some electric bikes before, but this was the first time I actually went for a real ride–we ended up riding around Embarcadero, Presidio, across the Golden Gate Bridge, and all the way to Sausalito. 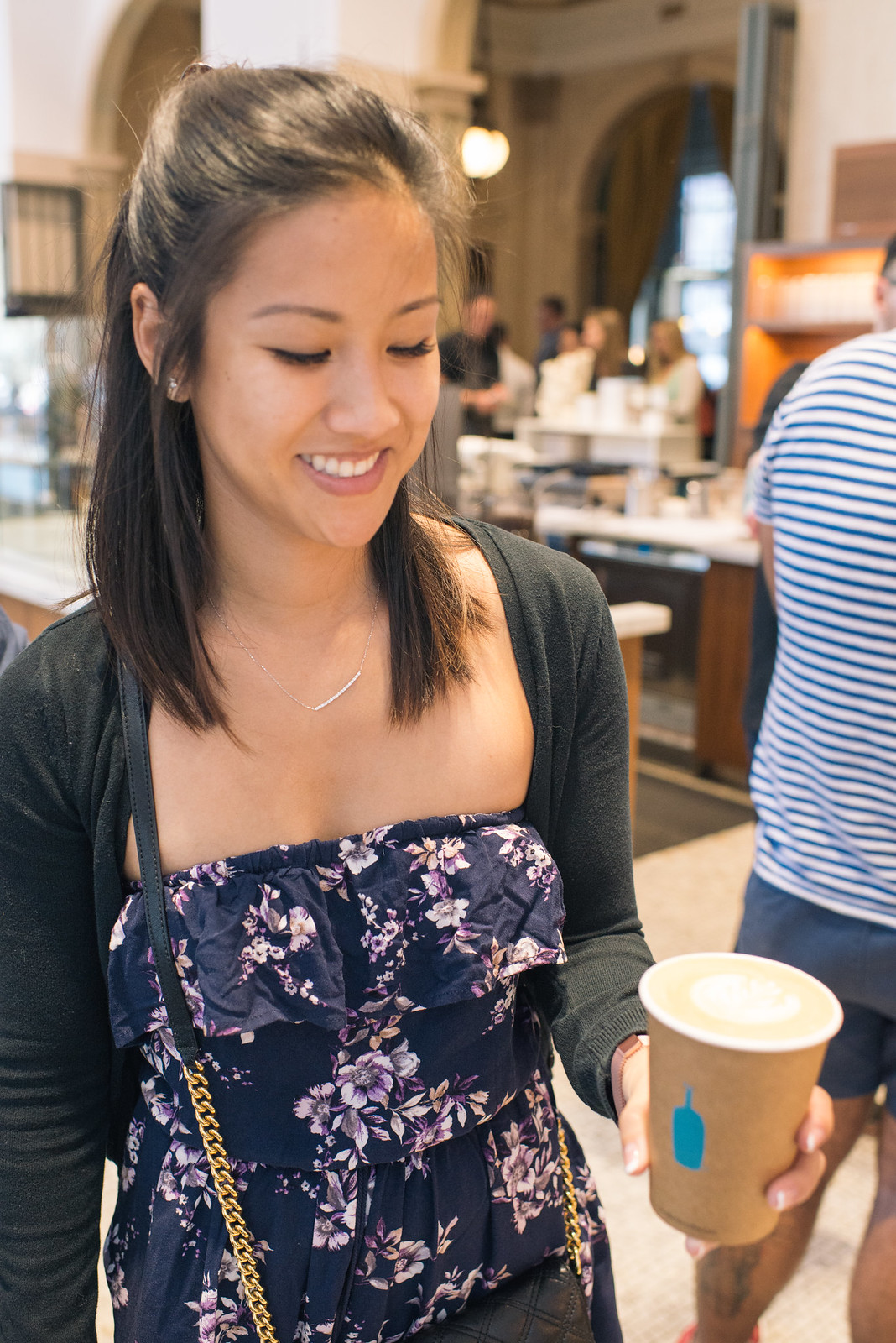 Julia getting some Blue Bottle coffee before the bike ride. 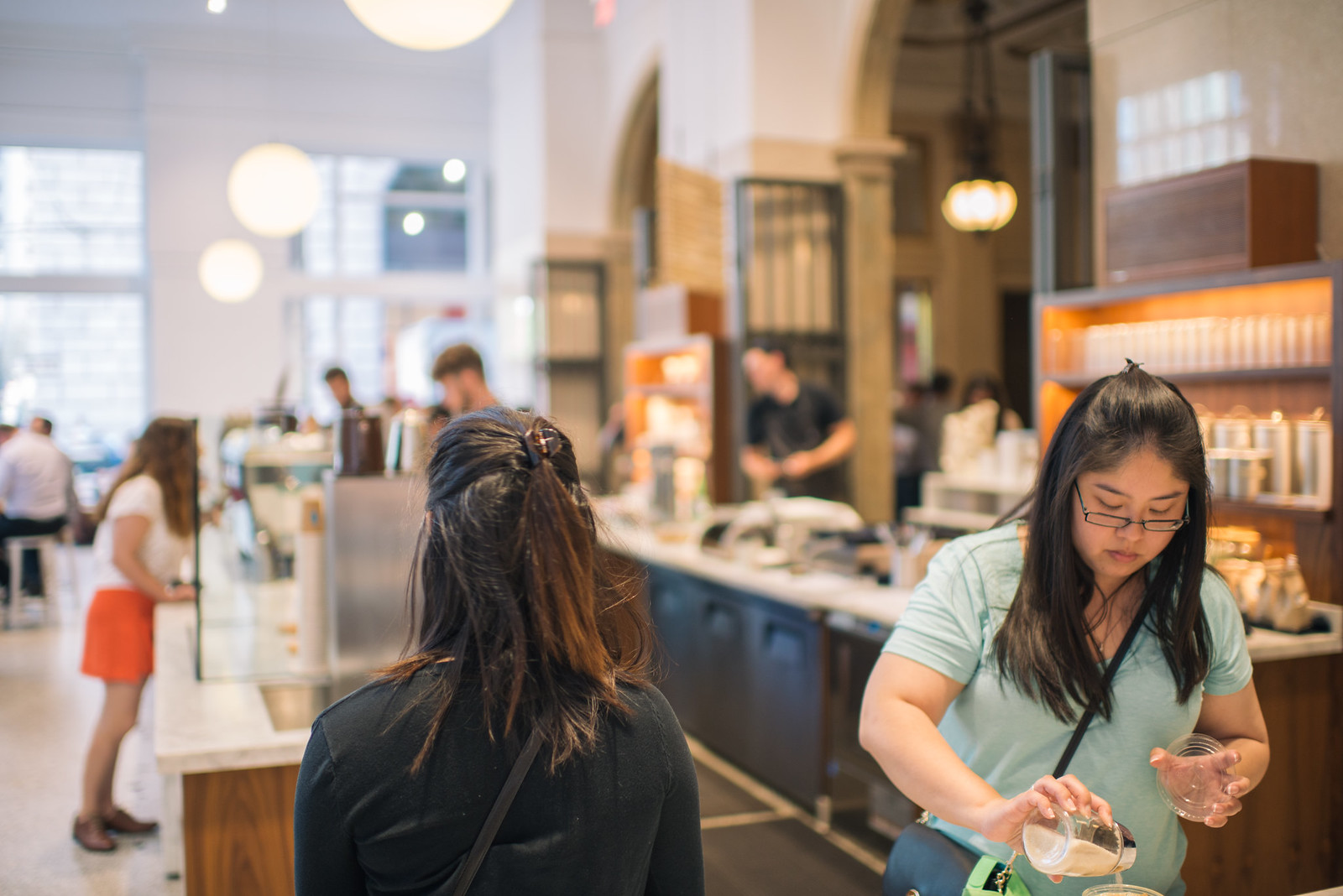 Photo of Annie perfecting her coffee, since it wasn’t quite right.

Side note, I’m not a huge fan of Blue Bottle. I love their logo, but their coffee is just too bitter for me. If you ask me, I’m more of a Philz Coffee kind of guy. 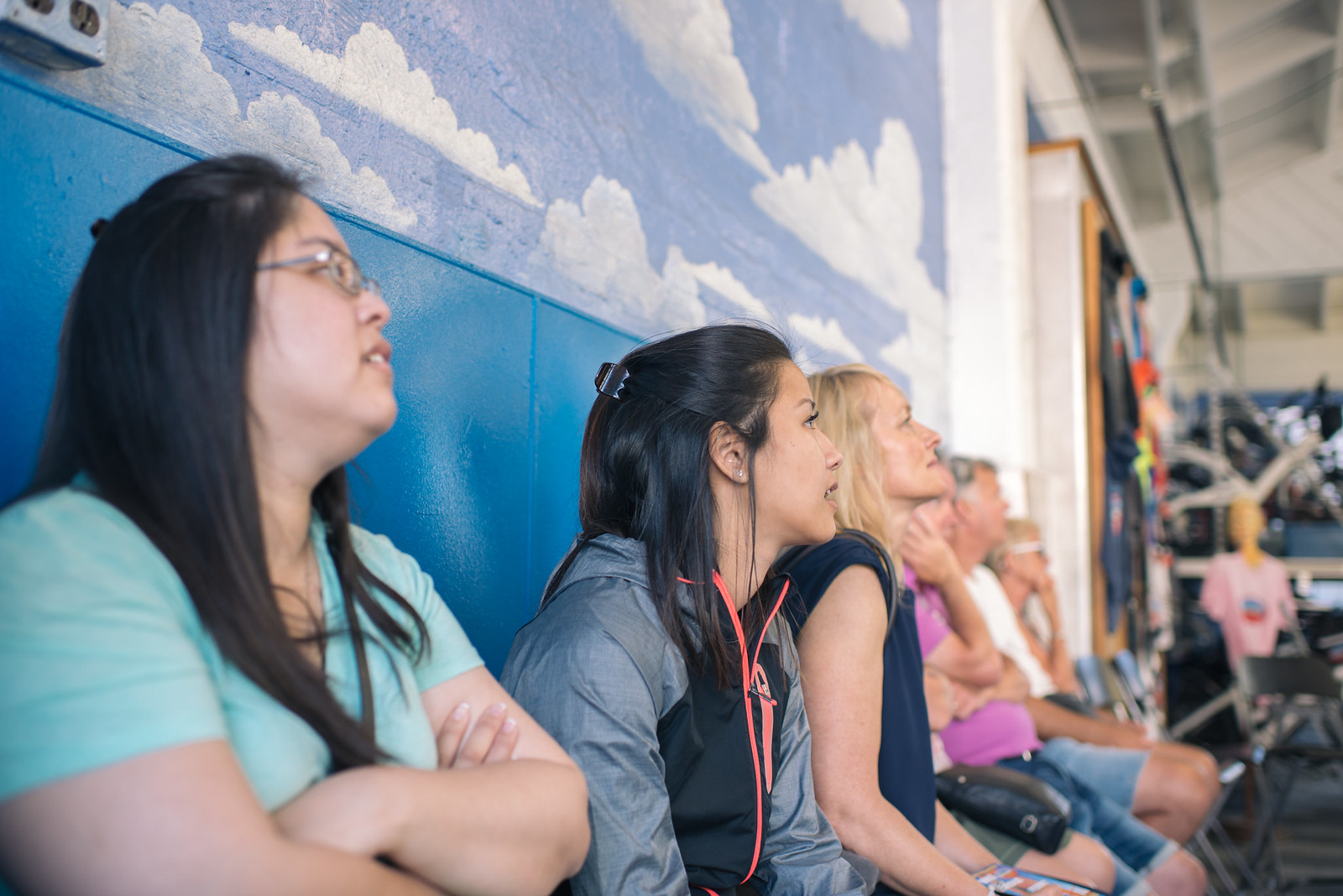 Photo of Annie and Julia watching the safety video at Blazing Saddles.

When we got to Blazing Saddles, they made us watch a video about the tour, and then they let us try different bikes. At the time, I really wanted to try out a Stromer, but the only models they had were really old ones. They had one really new model on display, and I wanted to rent that one, but they gave me some old beat up model. Fortunately, I spoke to the owner and they straightened everything out. We ended up renting their own home made electric bikes, and they were actually really impressive. 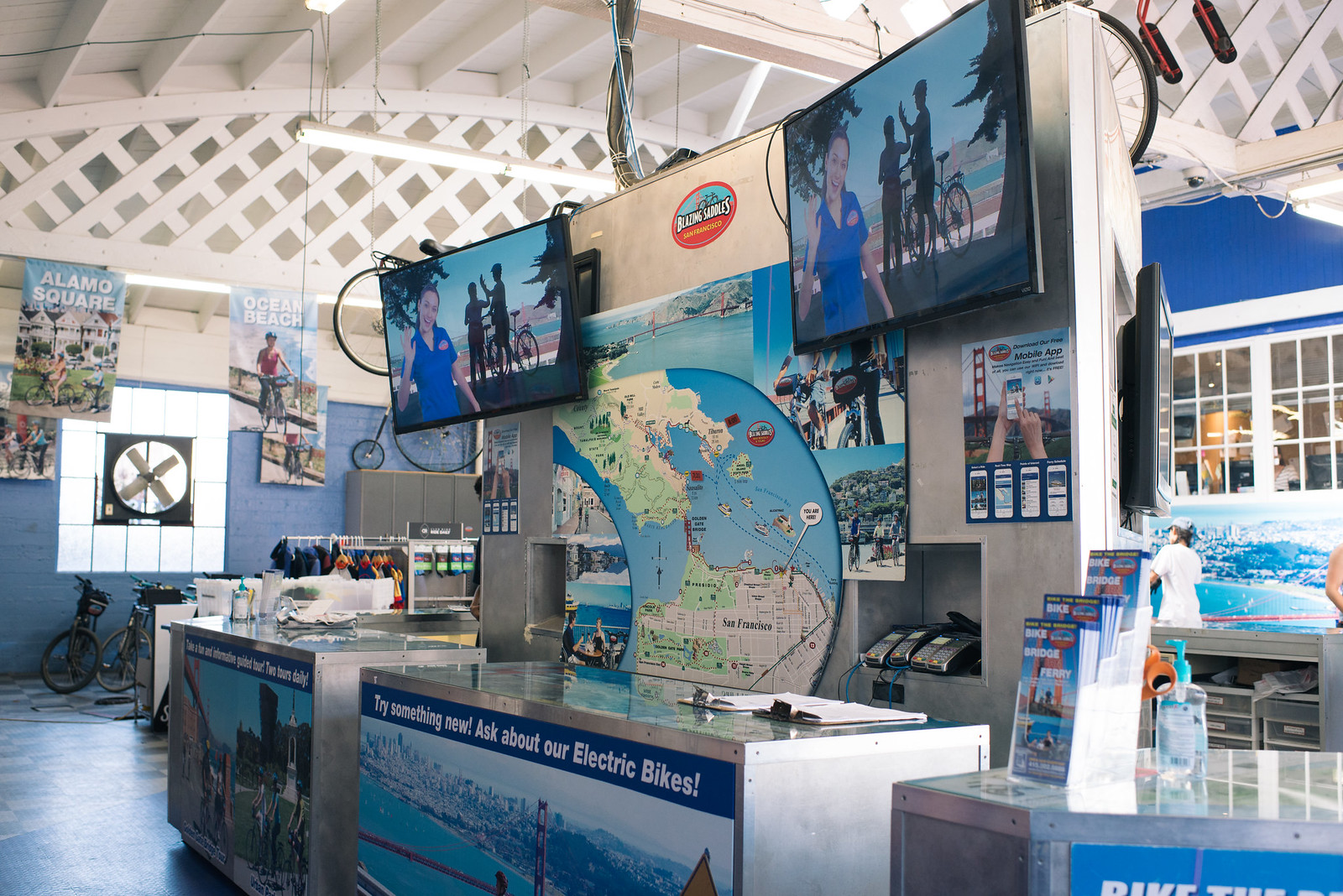 Video of the tour. 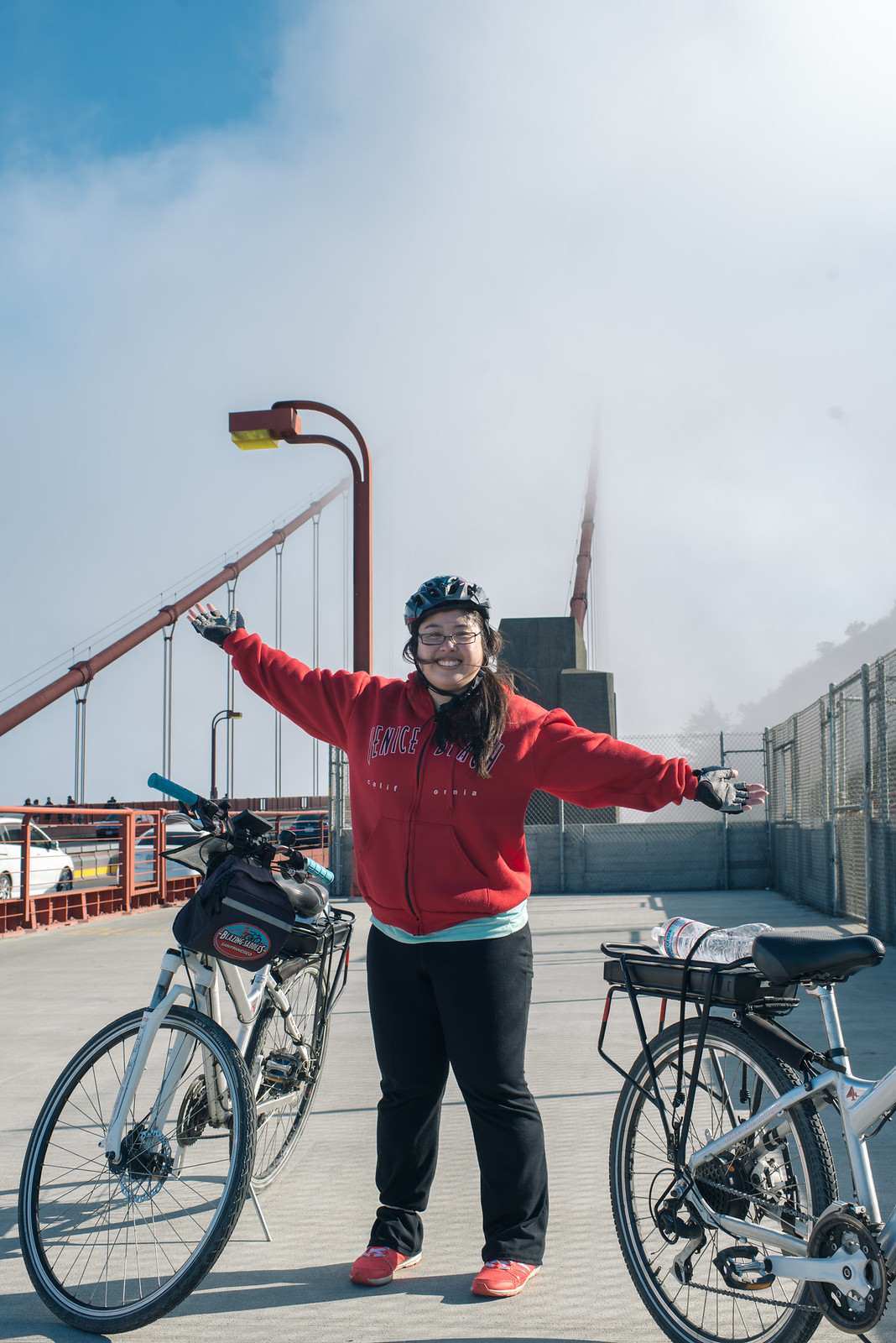 Photo of Annie in front of the Golden Gate Bridge.

A thick fog rolled in in a matter of minutes, and we could hardly see anything when we were on the bridge. It was a little unnerving, not to mention really cold. I think we were all underdressed on this bike tour. 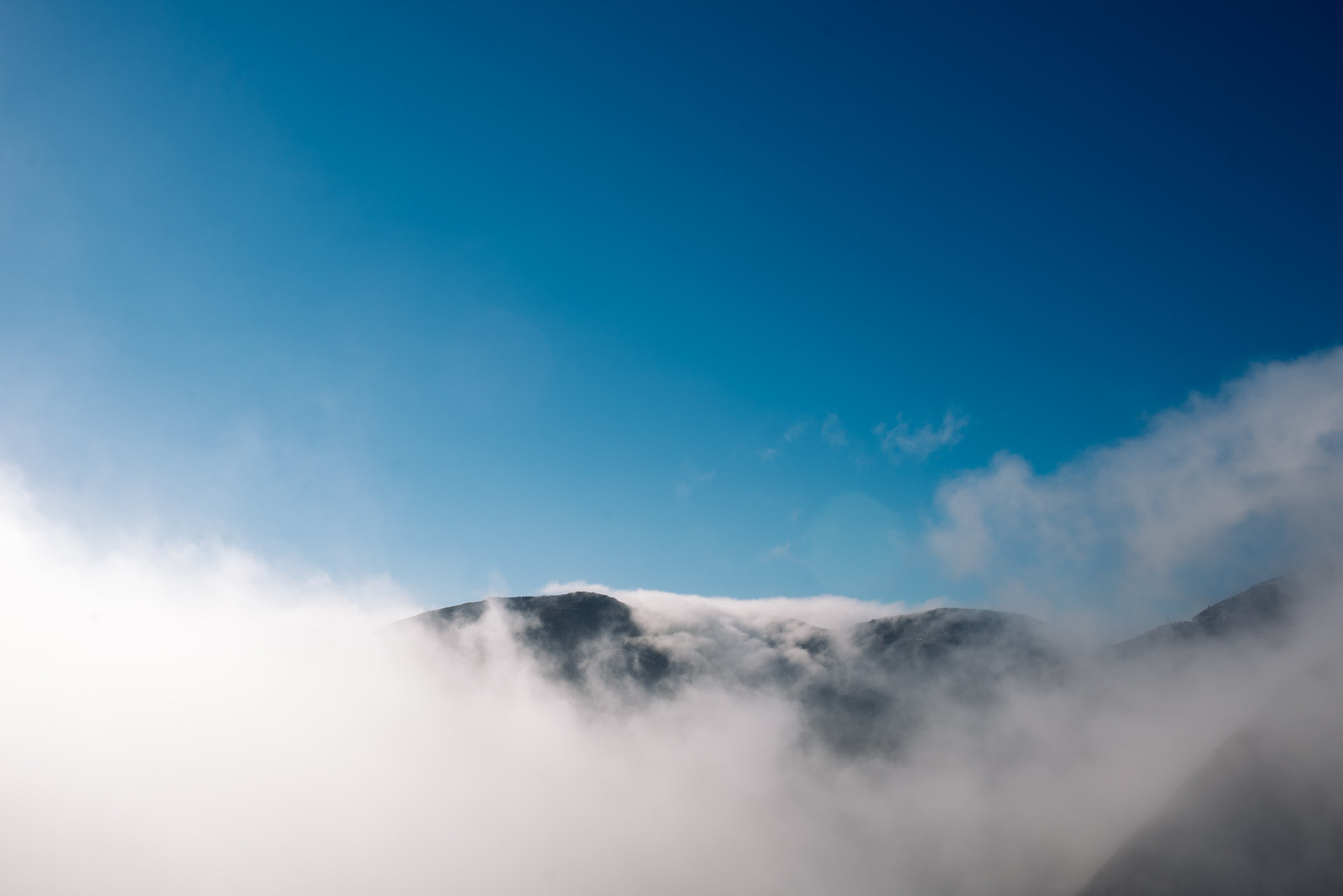 The fog rolling over the mountains. As you can see, there was hardly any visibility. 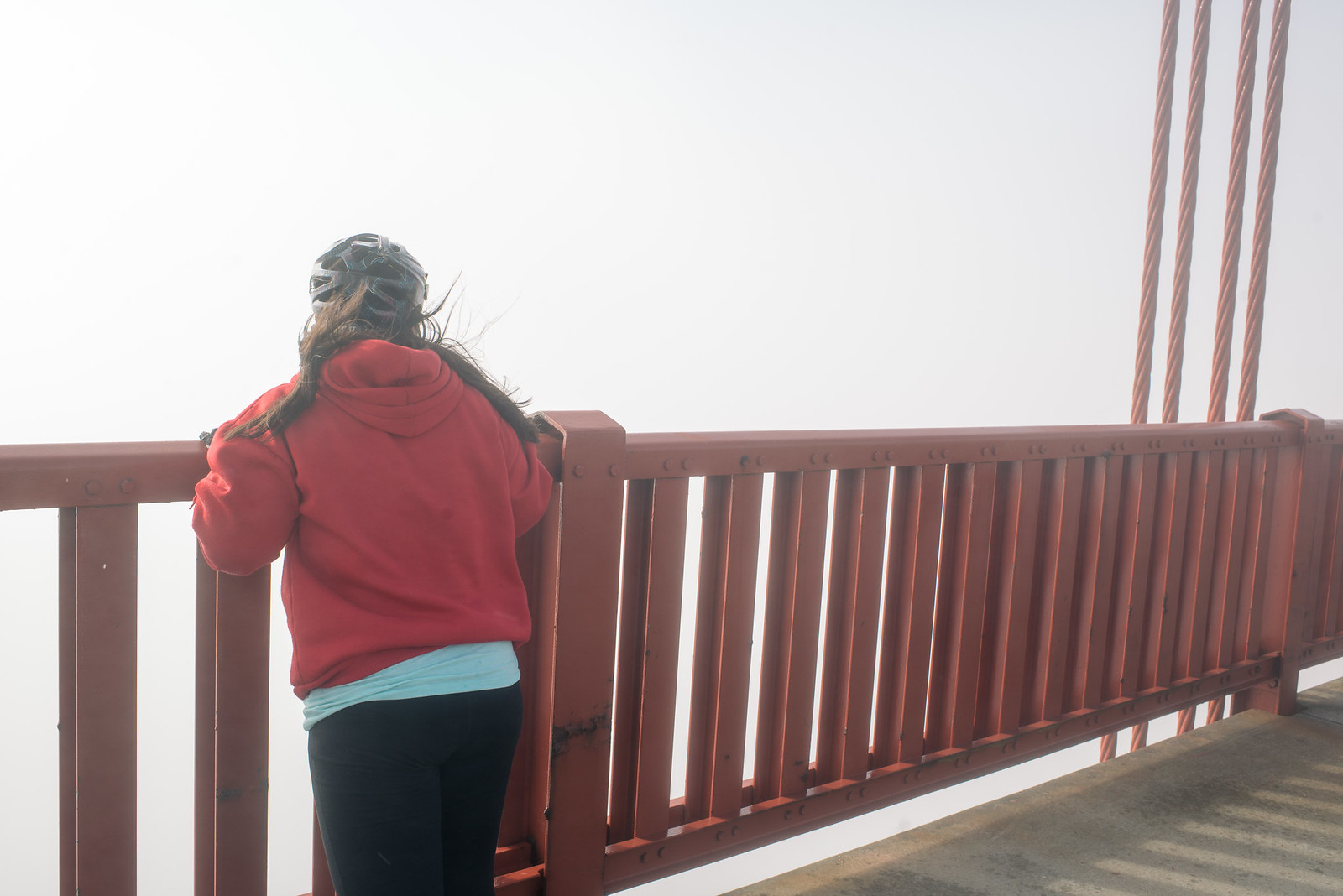 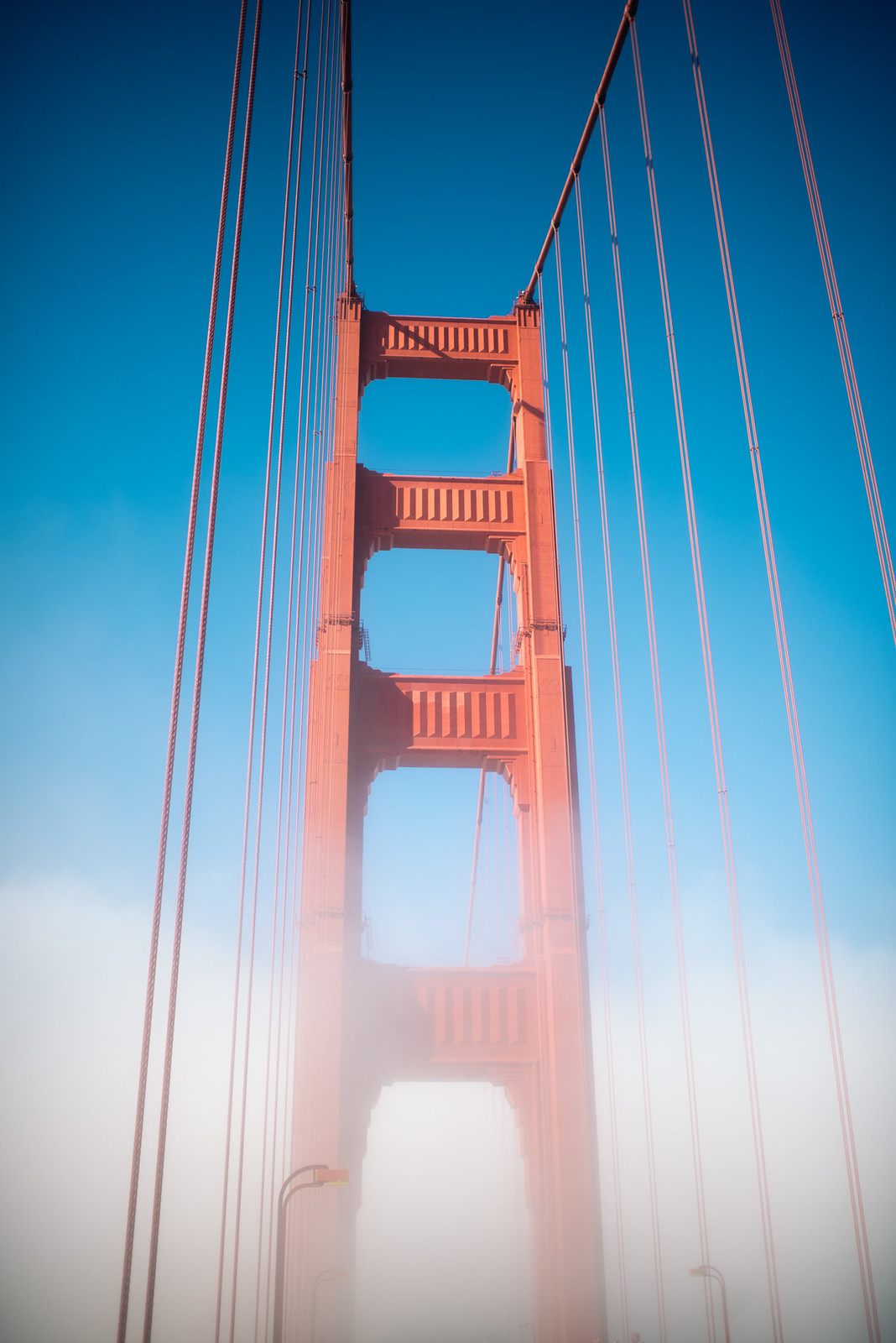 Every once and a while, you could see the top of the bridge. 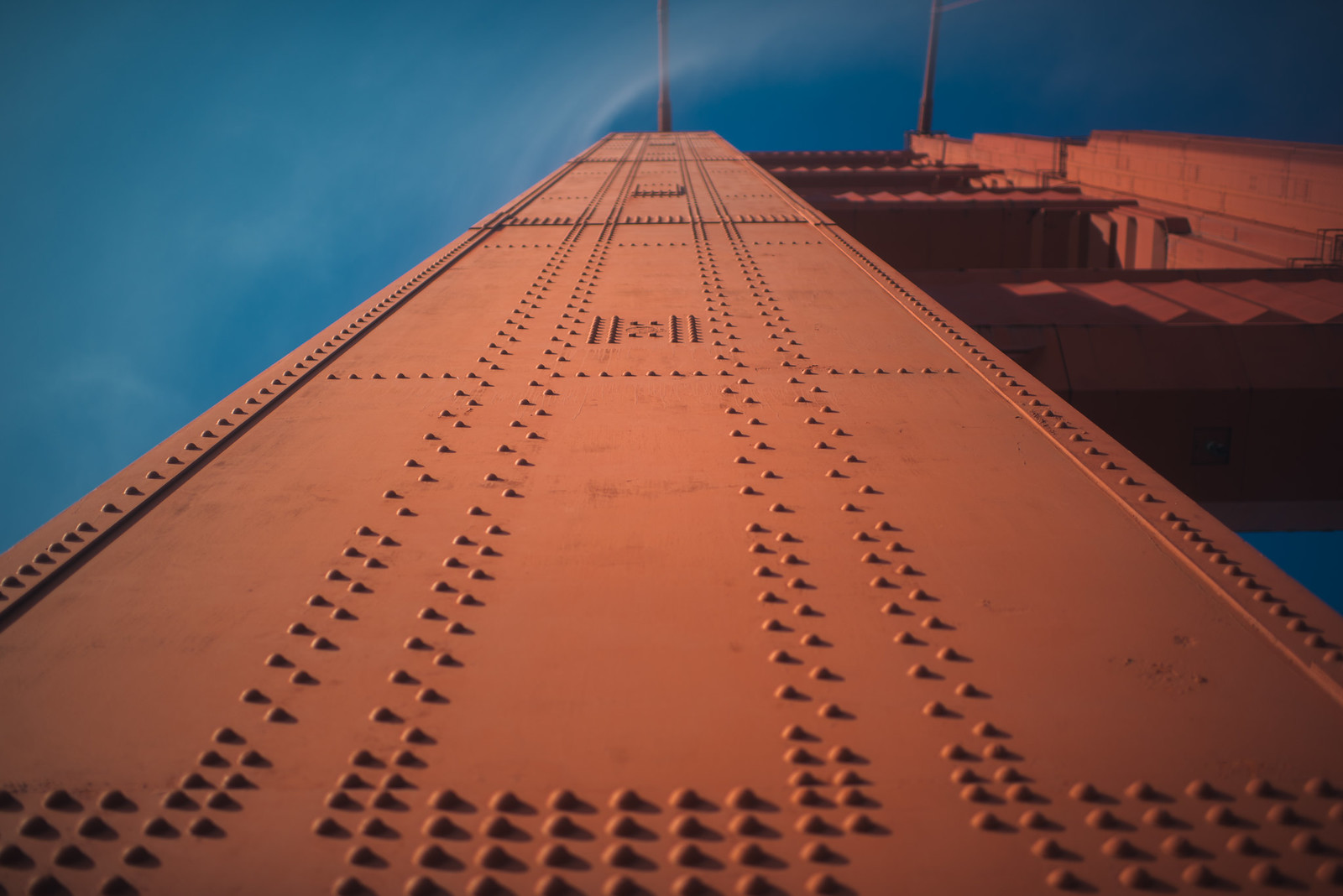 Looking up at the bridge scaffolding. Notice the fog wrapping around the top, carried by a brisk wind. 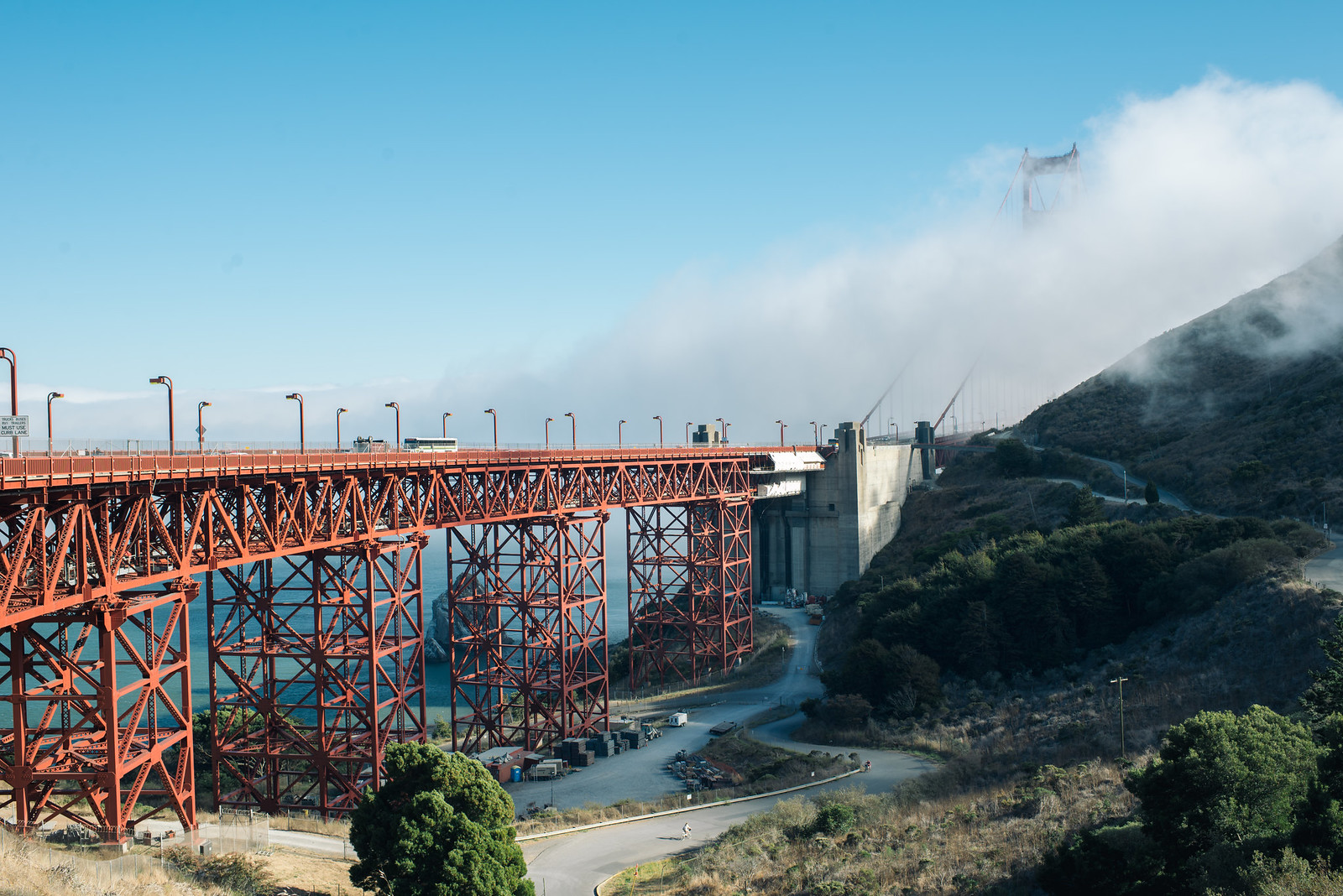 Fog completely engulfing the bridge. We were lucky just to see the top of the scaffolding from time to time.

I wasn’t joking about the fog. It was literally rolling across the entire bay in a matter of minutes. The fog was carried by a strong brisk wind, with strong gusts. 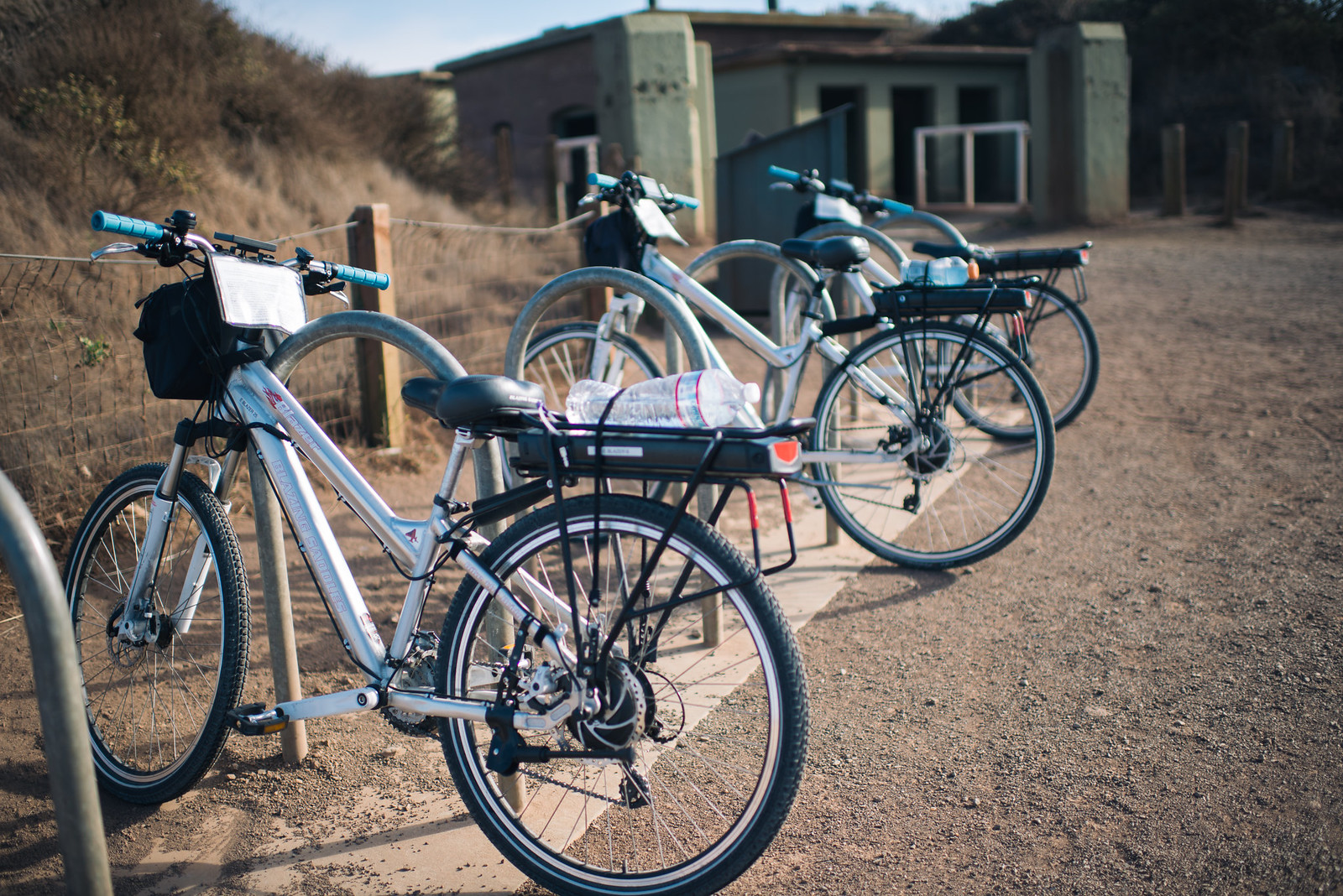 Photo of the bikes we road, built by Blazing Saddles.

I have to say that the bikes built by Blazing Saddle were exceptional. They were comfortable, easy to ride, and most importantly provided enough assist on even the toughest hills. The the best part was that they had plenty of power–we literally road for hours and had plenty of juice left by the end of the ride. 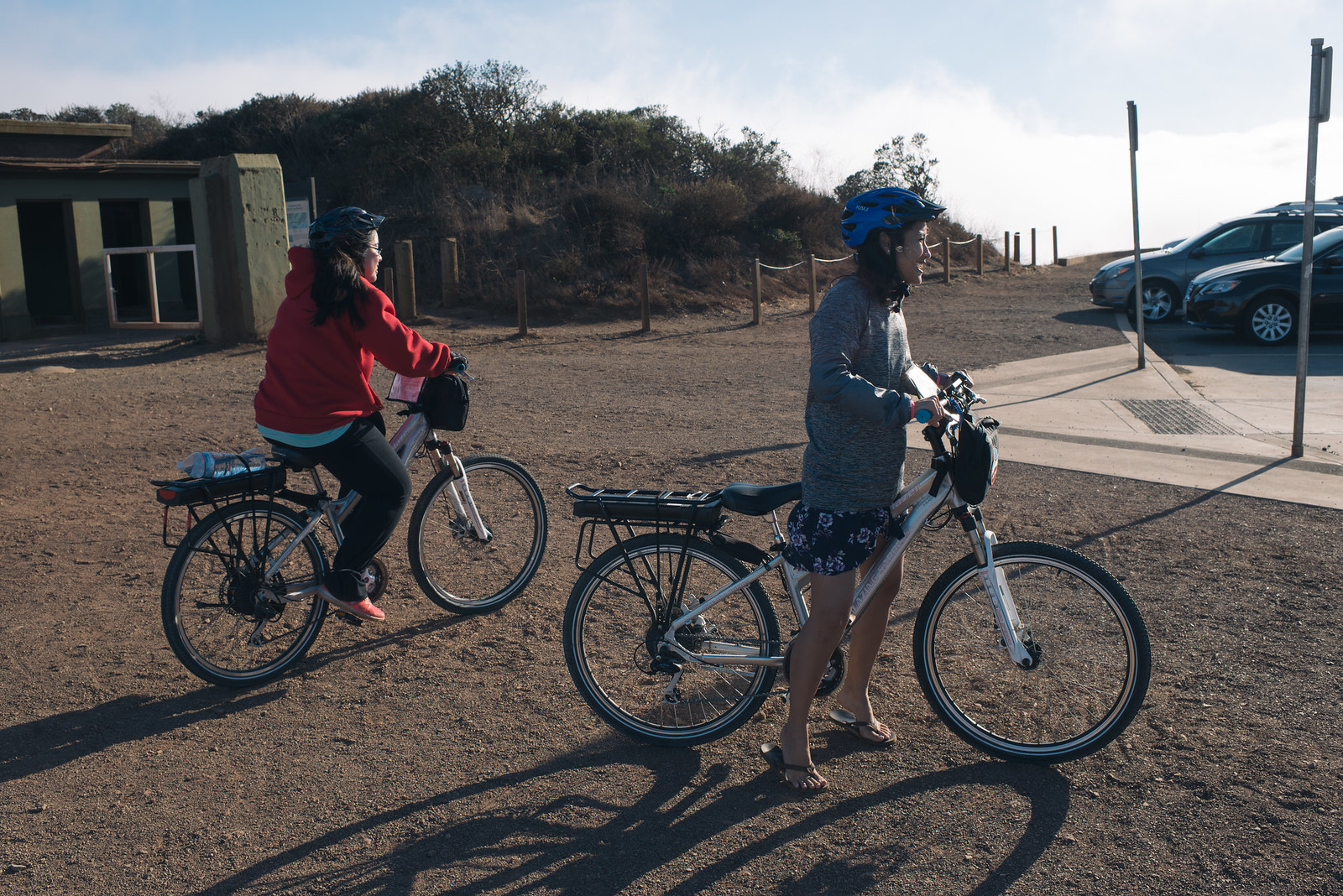 Photo of Julia and Annie preparing to ride towards Sausalito. 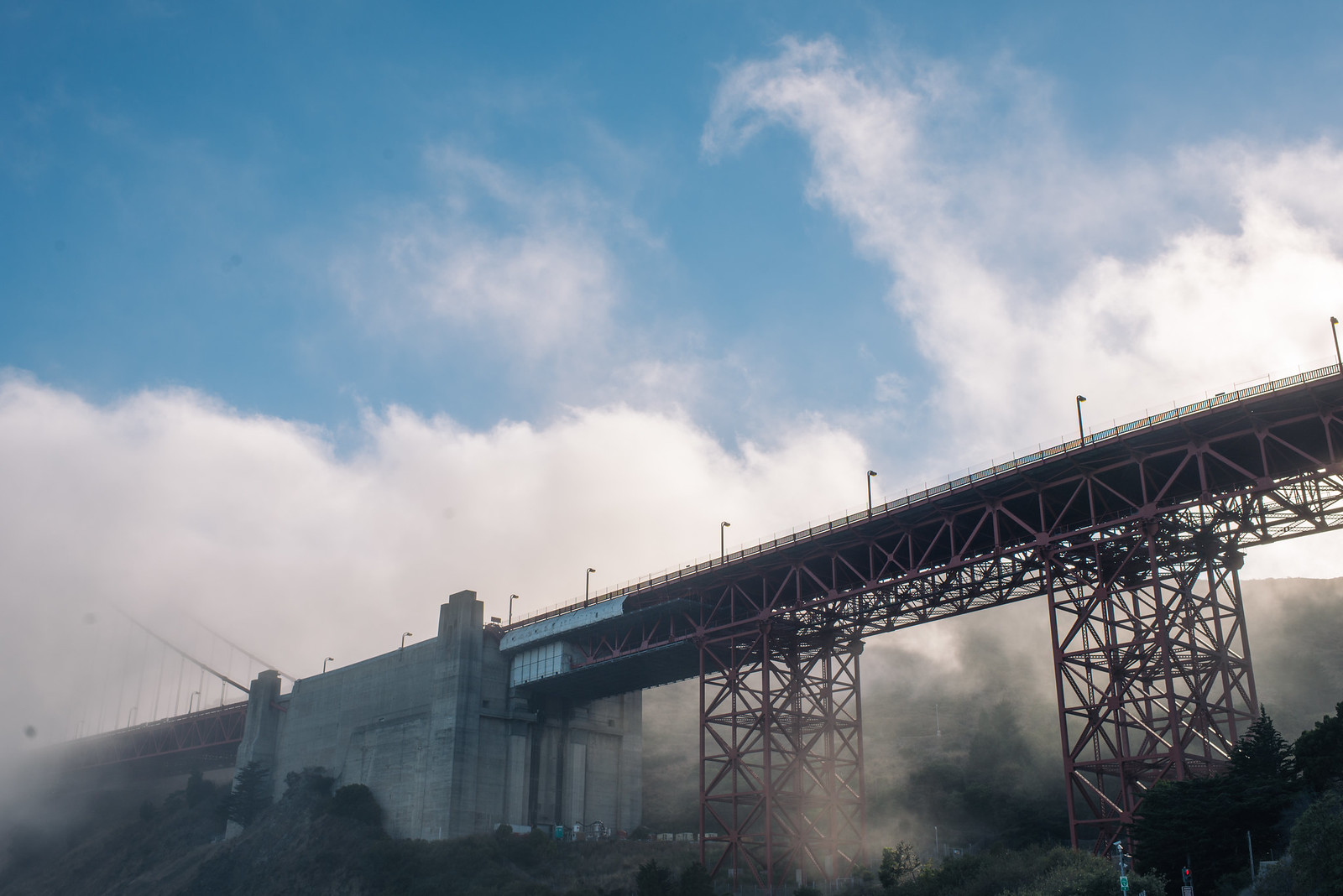 The fog was quite a marvel as it rolled across the bay and bridge. 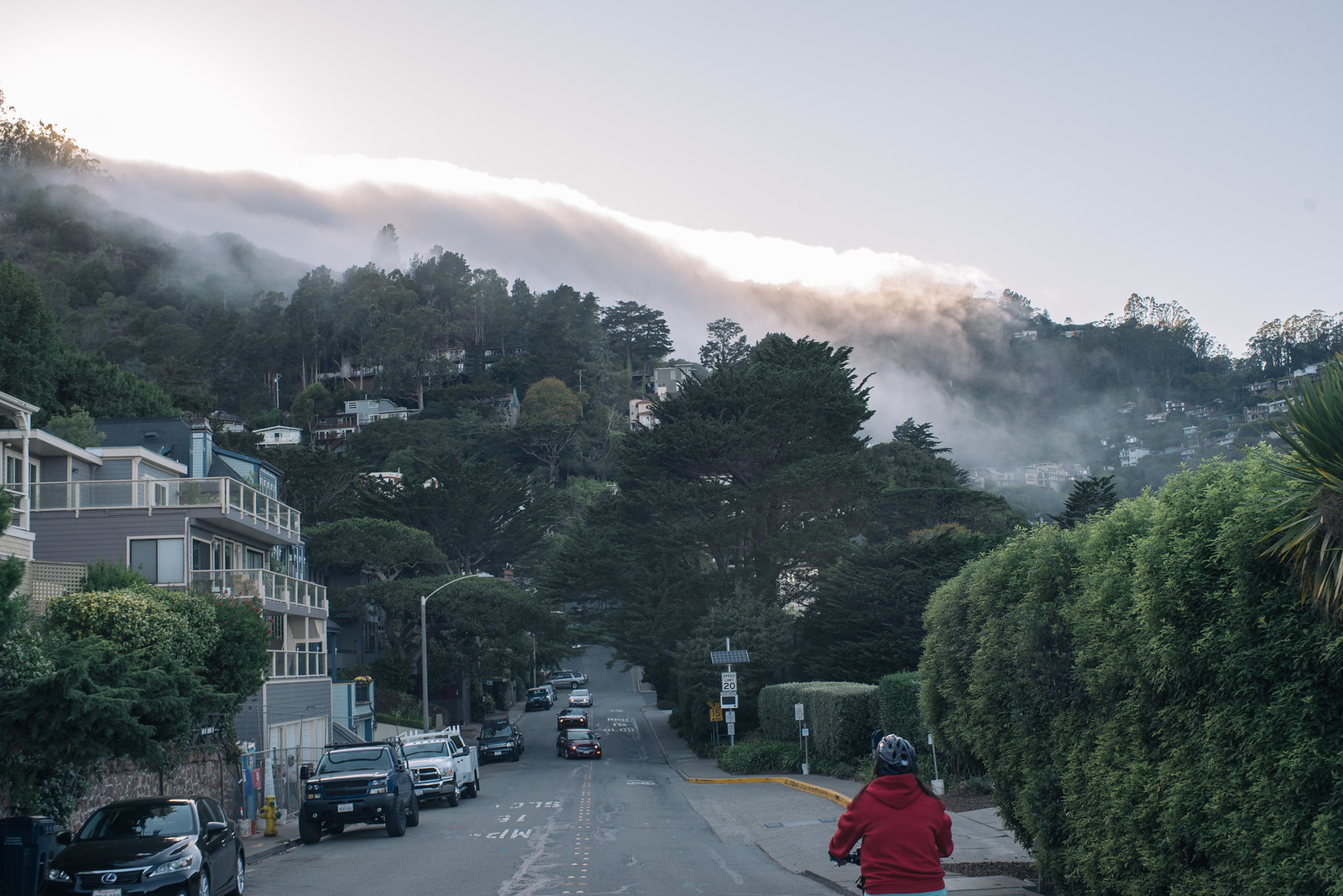 Fog rolling over the top of Sausalito.

One of the most breath taking scenes was observing how the fog would blanket the side of the hills around Sausalito. The fog would cascade over tree tops like a waterfall over rocks. 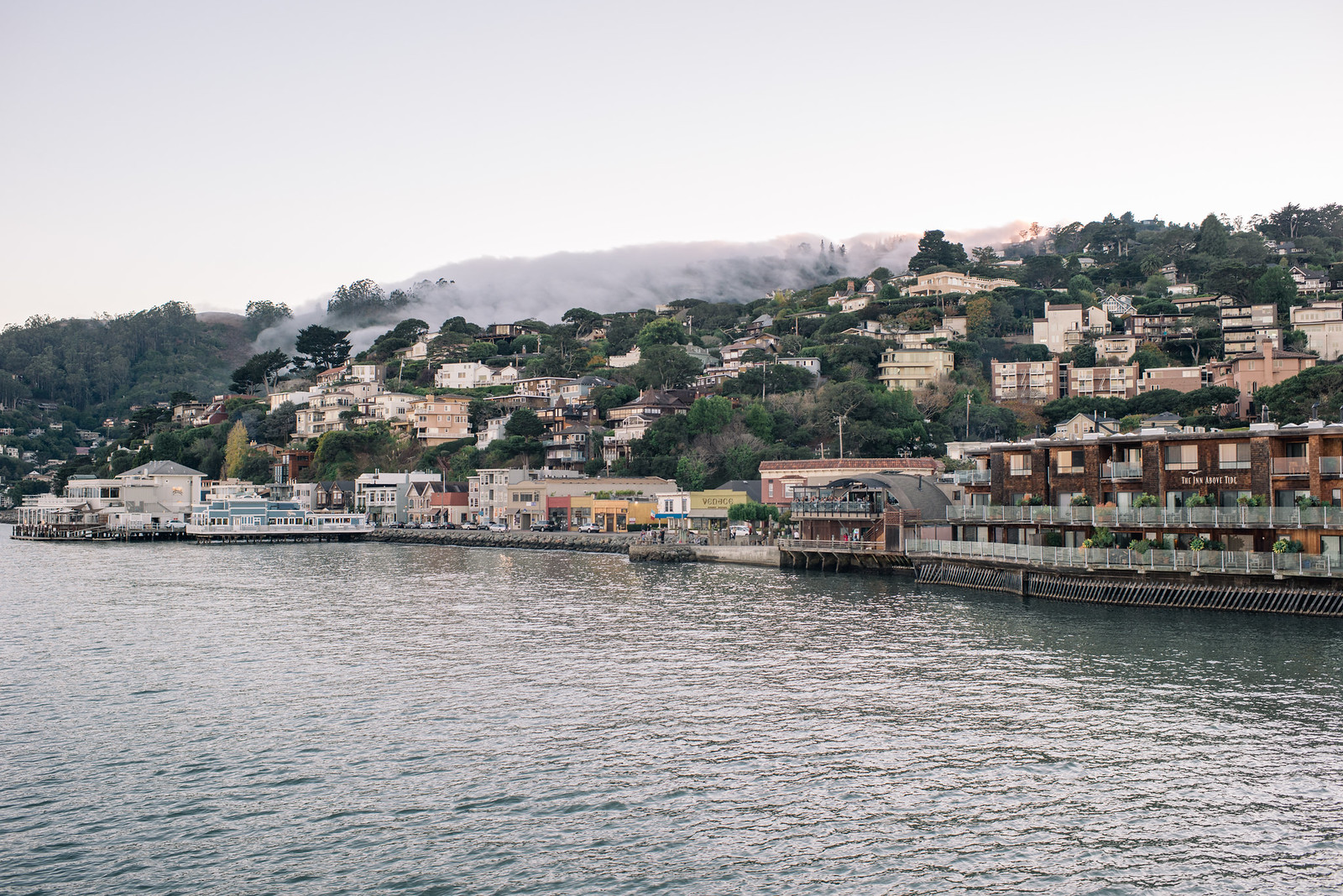 The sun started setting when we got to Sausalito, so we enjoyed the view and prepared to head back on a ferry. 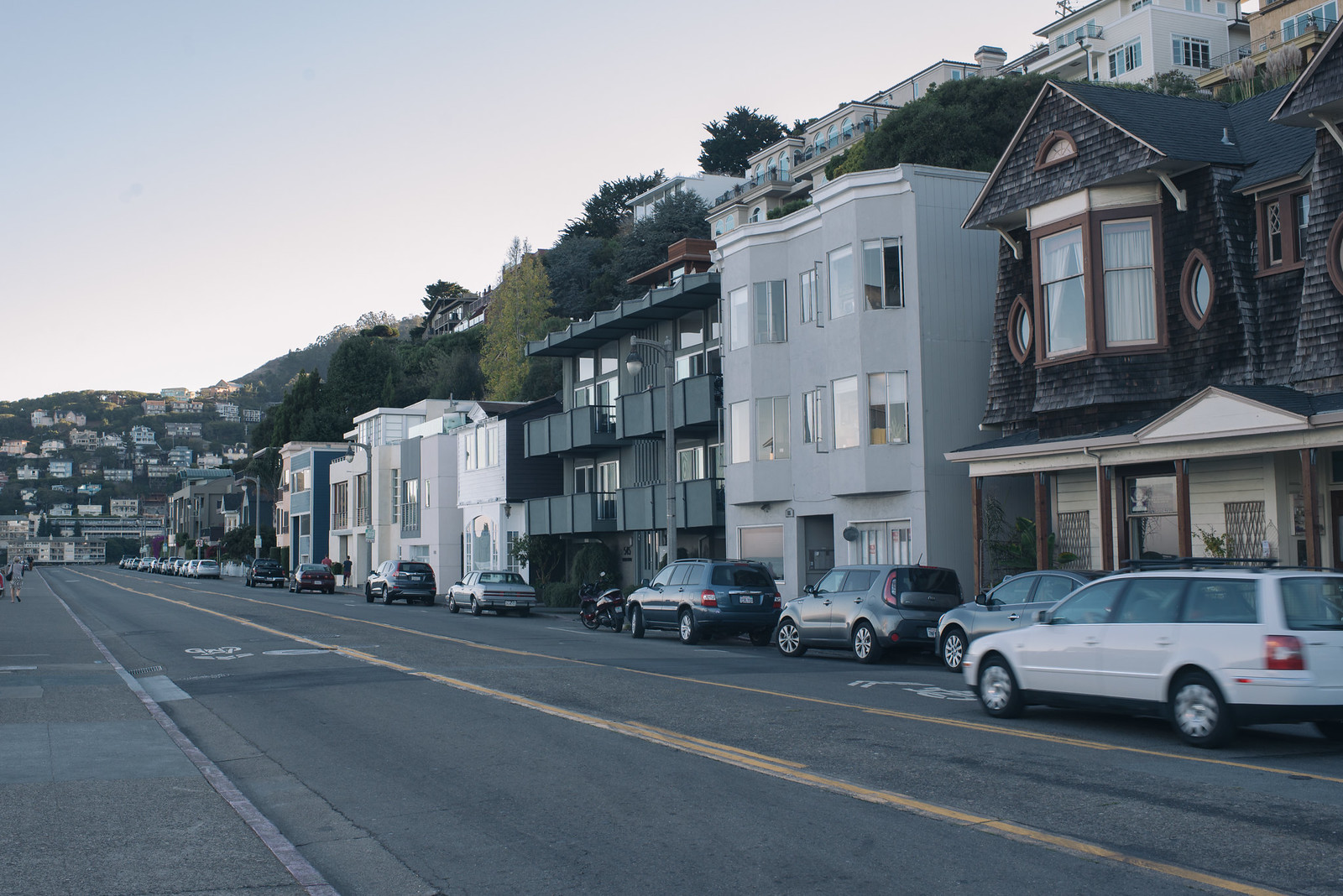 The main street that runs along Sausalito.

While this neighborhood looks upscaled and nice, I will warn all cyclists that the drivers around here are a little reckless. Watch out for the crazies, because they sure don’t give a damn about cyclists on the road. 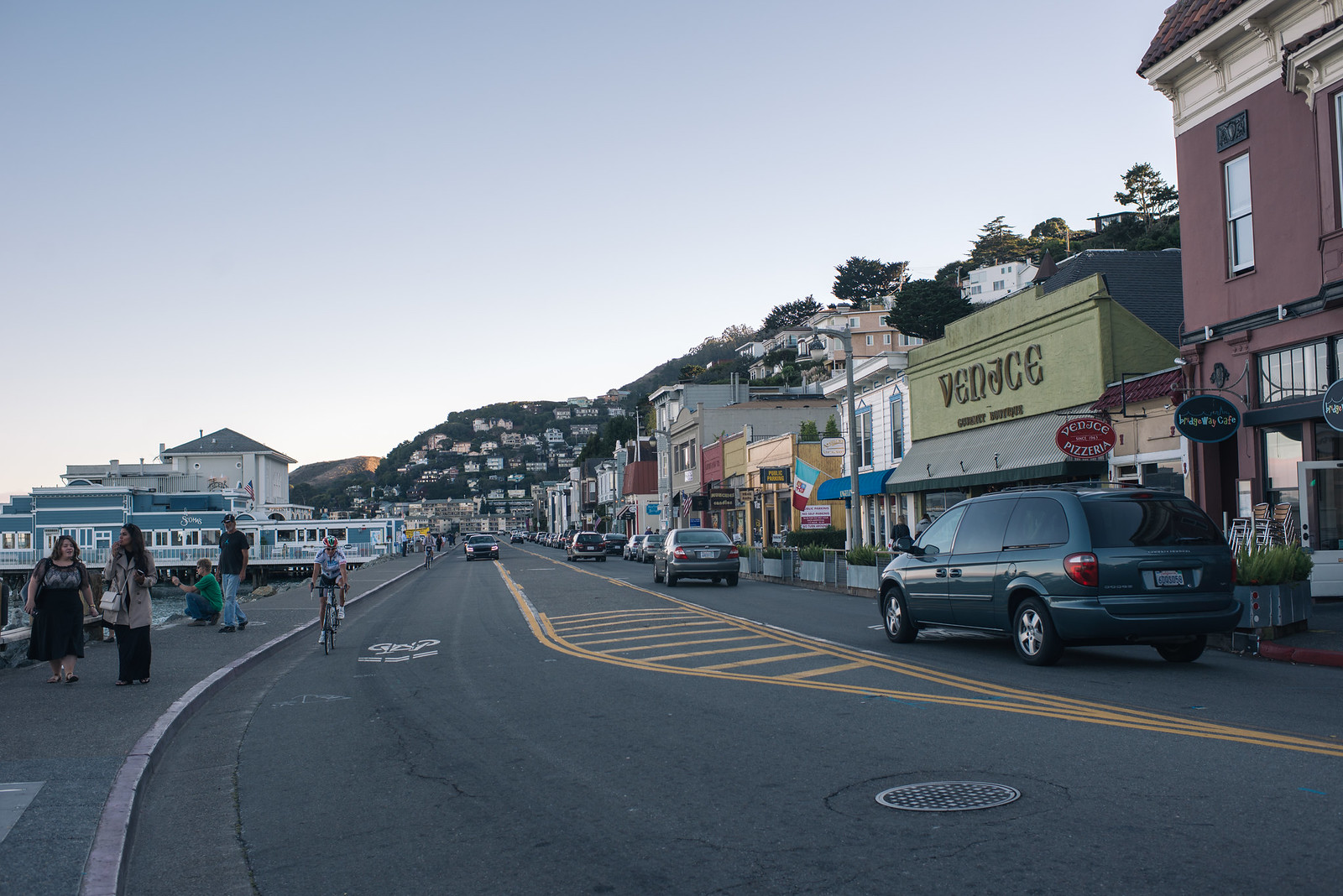 Another photo of Sausalito.

I can’t help but to think how much my dad would love this part of town. There’s something about it that feels small, but upscale. It reminds me a lot of Reedville, VA (but a rich version in California). 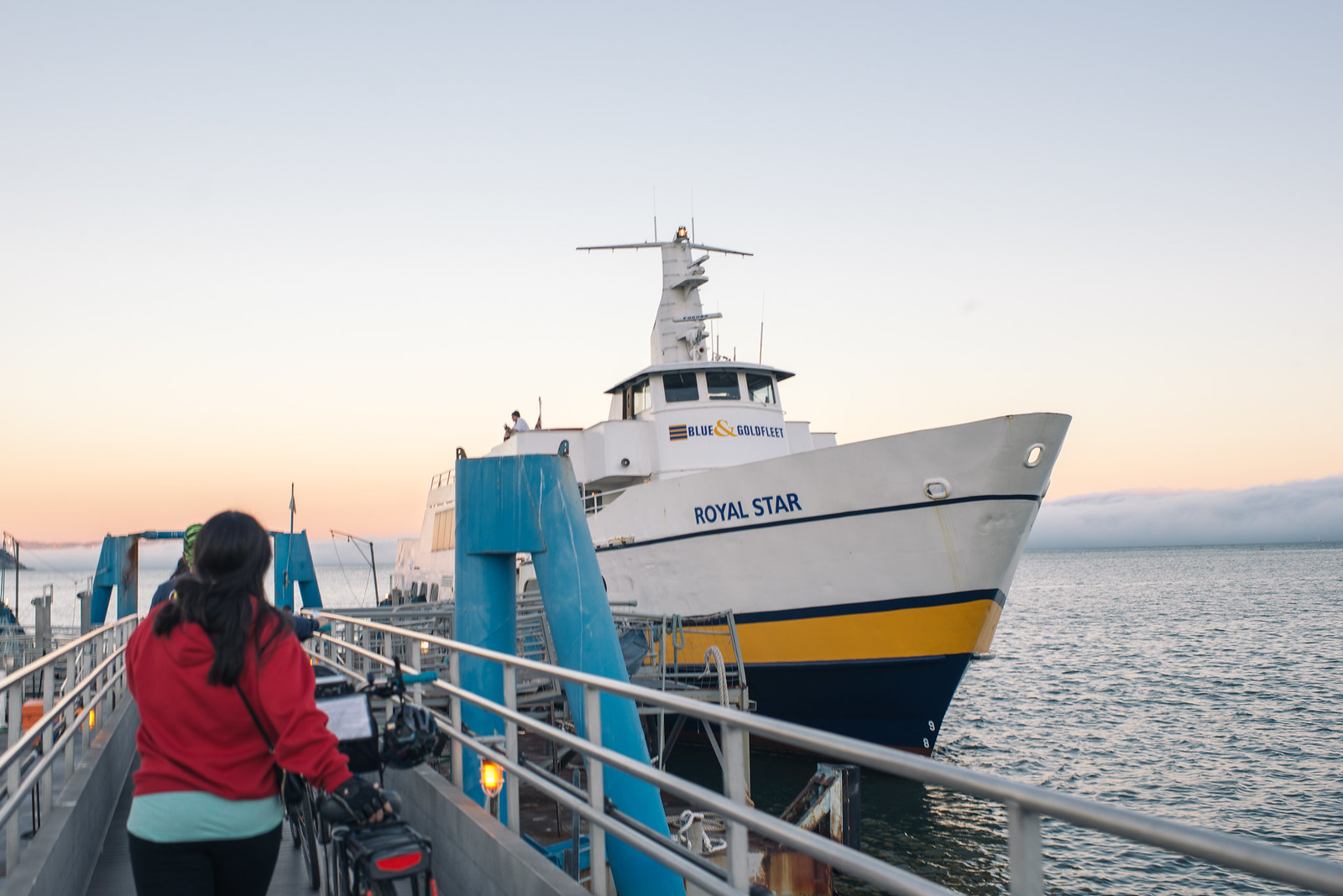 Catching our ferry back to San Francisco. 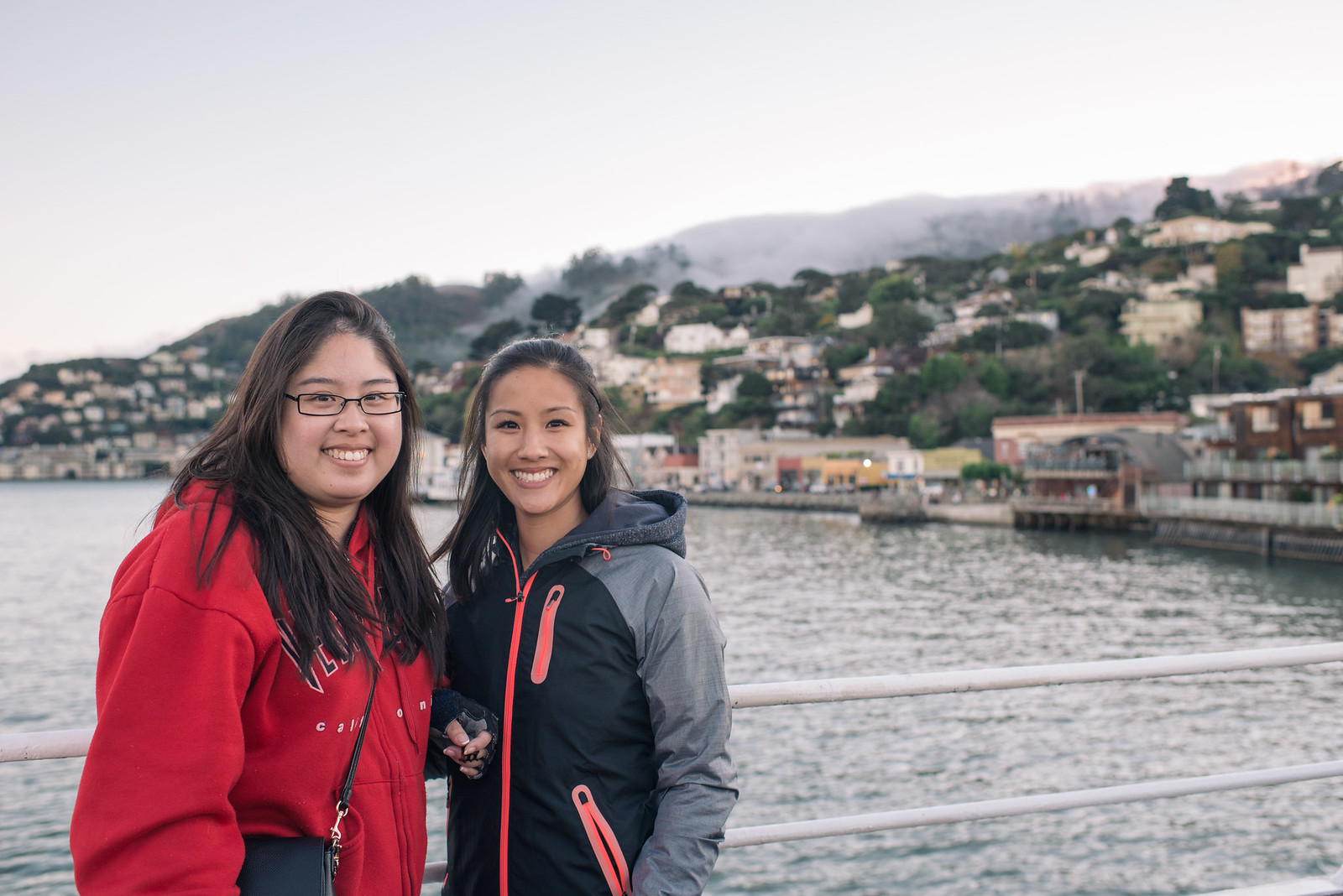 Photo of Annie and Julia, with Sausalito in the background. 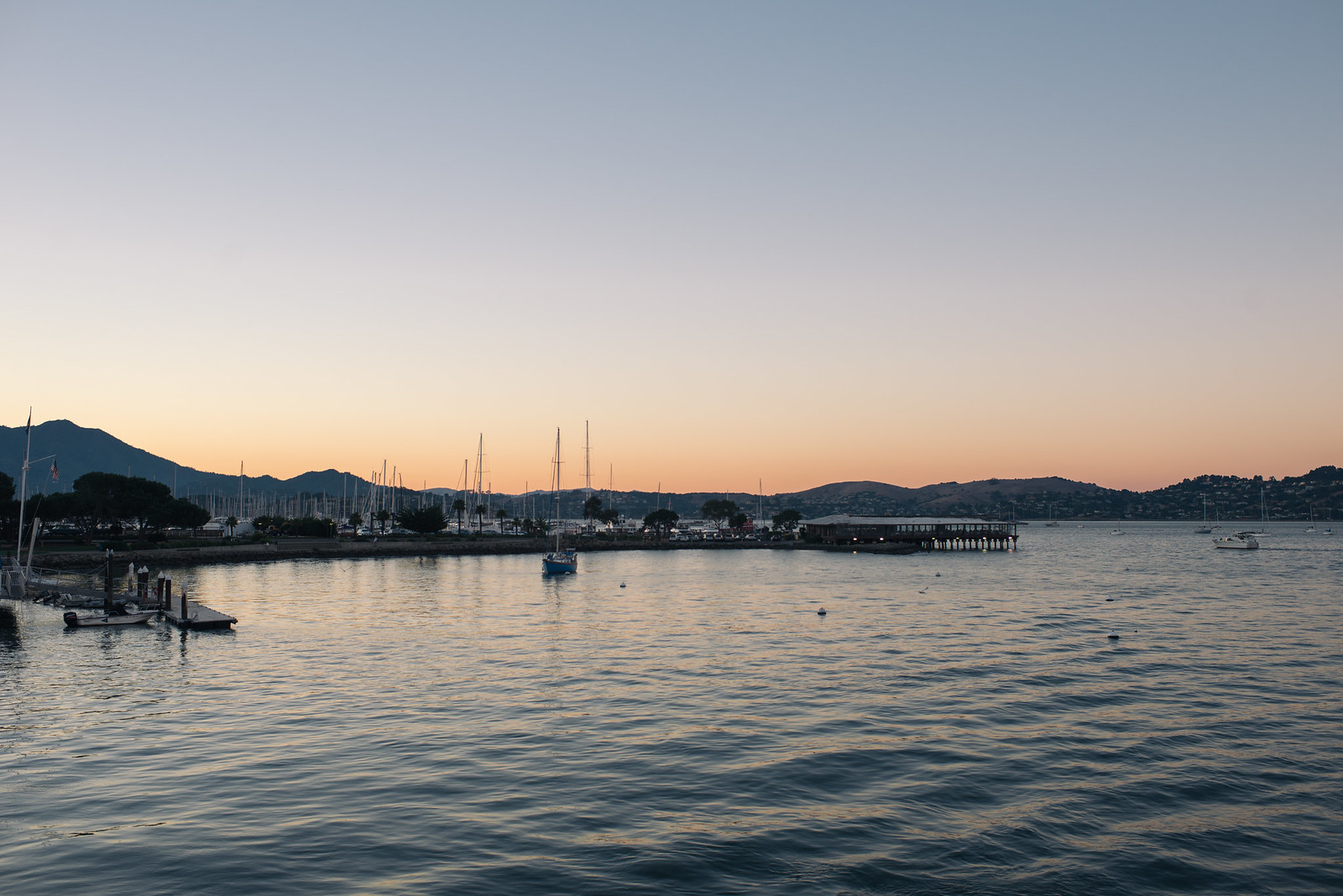 The sun setting, with an incredible reflection in the bay. 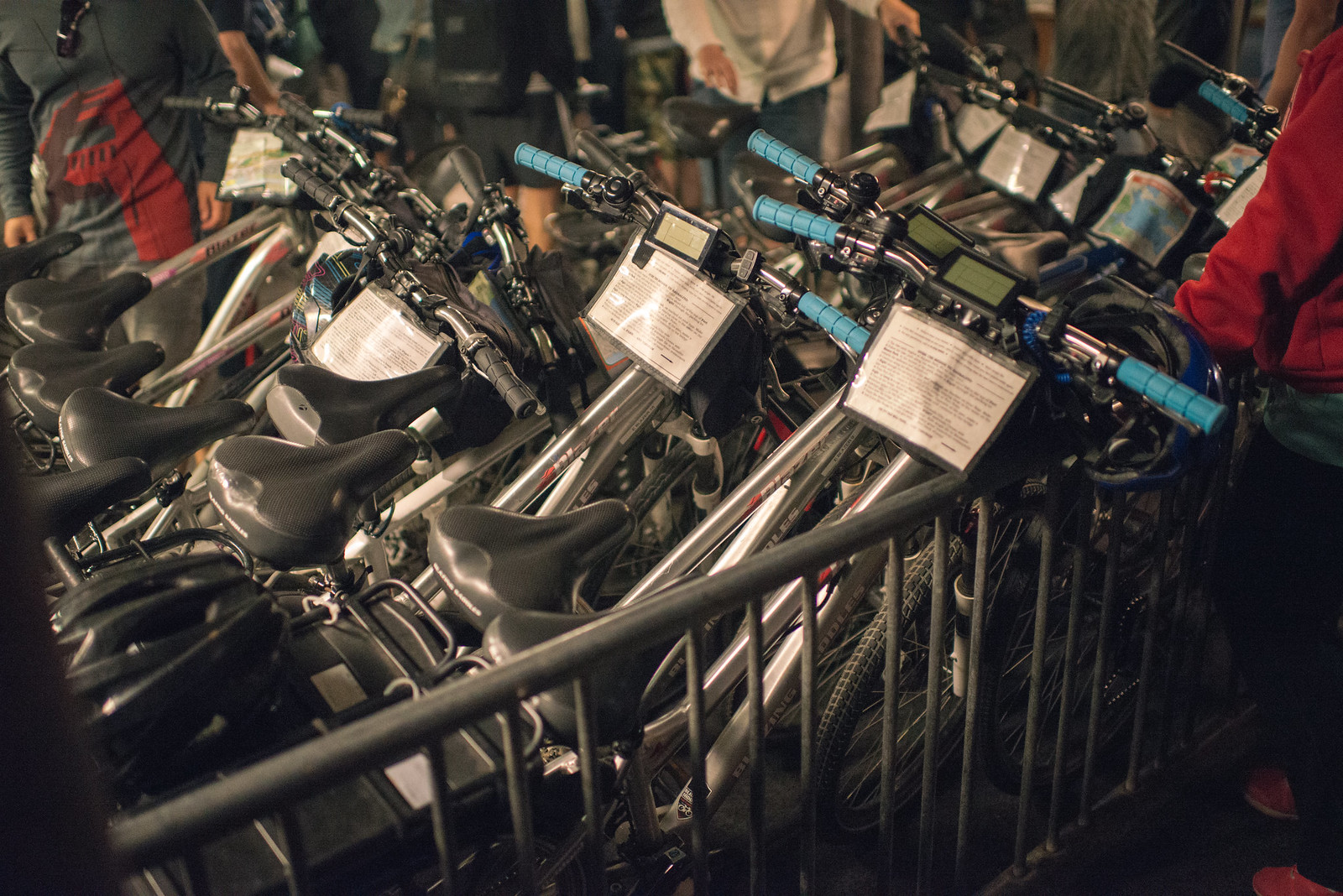 Bikes stacked tightly on the ferry. 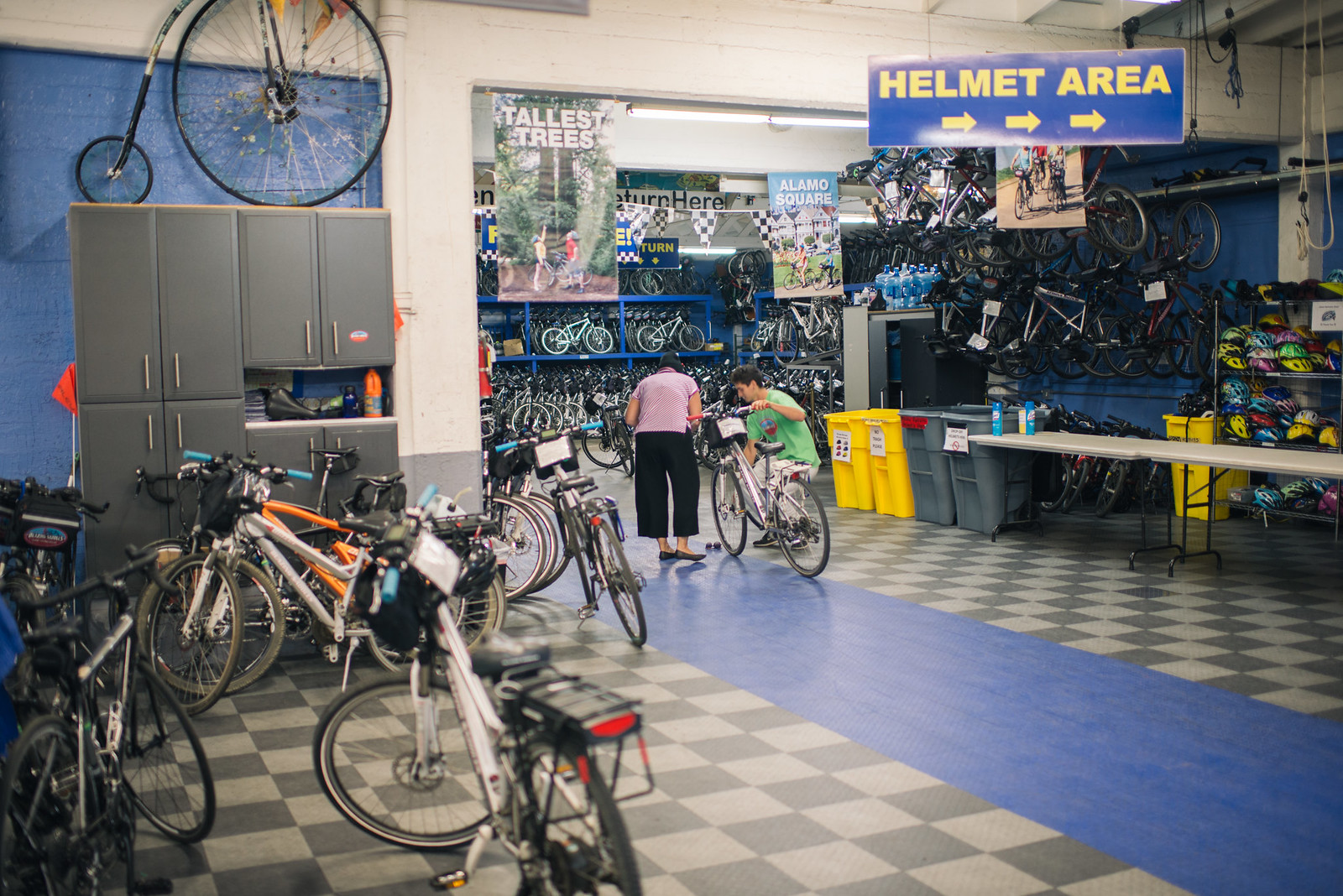 Returning our bikes to Blazing Saddles.

They had a nice warm welcome when we returned. I have to say that Blazing Saddle offered a really good experience and I would definitely go there again to rent a bike (if I needed one).

Annie and Julia will be back soon, and I have a sneaking suspicion that we’ll be doing this again. Only this time, I have my own personal electric bike that I can use.