i had a few minutes of spare time yesterday to work on a small side project. in addition to the addthis swagger, i wanted to have a little fun and create some addthis bling. i actually learned a couple things by using this tutorialâ€”i’ve never created my own custom patterns before. it’s really easy, and took about 15 minutes. i added a couple extra filters to give it a more realistic effect. i talked to one of my coworkers and they estimated that this bling would cost roughly $80k. 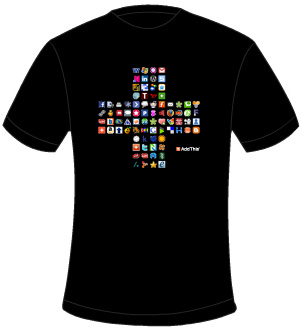 i also had the chance to create another shirt design… this is a really low res. i’ll probably go ahead and create the real tshirt this weekend. looks like alot more people in the office will order one.