AddThis in 50 languages. And counting. (A Visual Description)

AddThis is translated in over 50 languages, and provides the right language to the right person. In the diagram below, there are two people who speak different languages. Jeff’s (pictured left) native language is Chinese. You’ll notice that the menu interface automatically translates his menu and the services he uses. On the other hand, Jodi’s (pictured right) native language is Spanishâ€”look at how she gets her Spanish menu. Isn’t that nice? ^_^ 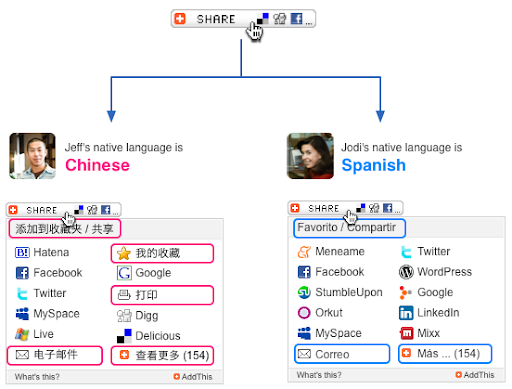 The logic was designed and built by the AddThis team, but the latest translations were contributed by the public. With the help a multilingual audience, AddThis is helping connect the web, in any language. I want to thank all the talented people who took the time to help usâ€”they truly care about sharing. And they did it by using the AddThis Language Database (pictured below). The database shows all of our translated languages, as well as pending languages to be released in the near future. 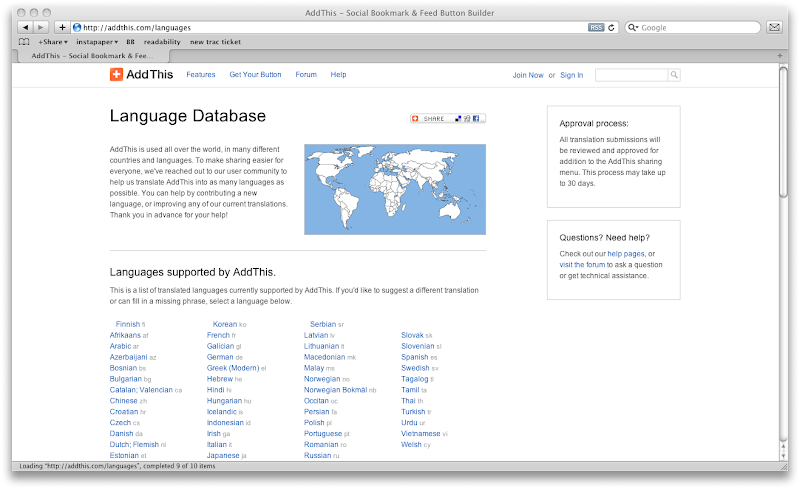 Here are some of the translated buttons. You may recognize some of the languages. If you look closely, you’ll even see a button that looks backwardsâ€”we flopped the button around to help anyone who shares with AddThis in Arabic, so it looks correct in their native language. See all the buttons here.

I’m really looking forward to seeing more languages… even ones like Pirate or Klingon (because we’re nerds like that). Wanna give it a shot? Visit our Language Database. Or if you’d like to read more, check out the AddThis blog post about it.

Big hi-five to my team and all the talented people who helped translate AddThis.