I was going through my Facebook and Twitter updates and saw that Hooman (our CEO) said that Orkut was getting some real traction on AddThis’s sharing platform. This is huge accomplishment for them because it was just recently added to our service directory on November 13, 2009 (just under 2 months ago).

In disbelief, I checked out the AddThis Service Directory and the data doesn’t lie. Typically Facebook is #1 in almost every country, and makes up 28% of all of the sharing on AddThis… but you’ll notice that it’s #7 in Brazil. Check it out: 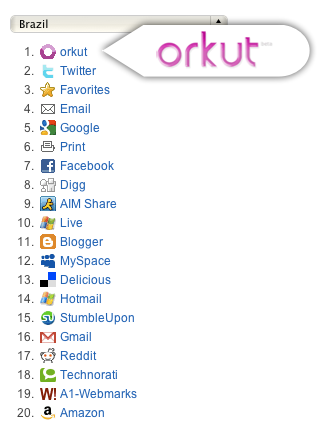 It’s wild to see a service that’s not Facebook or Twitter dominate sharing in a country like Brazil. You’ll see other data released from other sharing widgets claiming that Email is the most used service in the world, but that’s just a generalization of data. There is a wide spectrum of social networks that are popular around the world like Orkut, just as there are different people with different tastes, different friends and different trends. 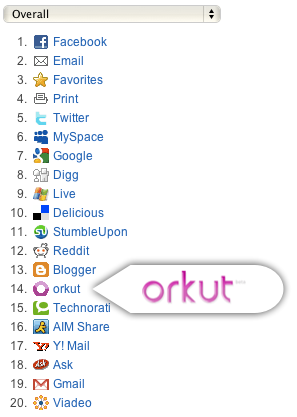 Just to put things in perspective, Orkut is moving up so fast that it’s #14 on the AddThis sharing platform, above email services like YahooMail and Gmail. As much as I’m a huge user and fan of Facebook and Twitter, they’re not the alpha and omega of social networking or sharing. Yes they’re enormous, but there are other niches out there. It’s interesting to see Orkut thrive in a misunderstood ecosystem. 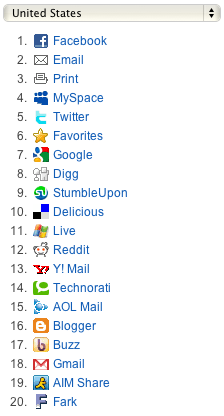 Meanwhile, In the United States, Orkut is not on the top 20 list. I’d like to openly ask if anyone knows why Orkut is so successful in Brazil and not the US. Obviously Orkut is connecting people in Brazil in ways that no other service is. 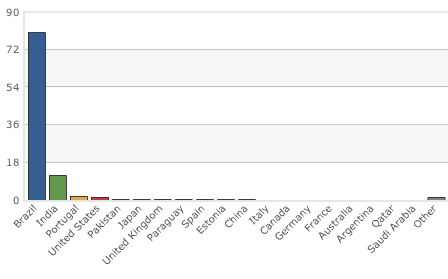 You’ll also notice that Orkut has some growing presence in India, as it is #11 over there.

Huge kudos to our friends at Orkut. I guess it’s time for me to start my account and connect with the People in Brazil. FYI, I’m hoping to start Brazilian Jiujitsu again in March… I’ve been out of practice for the last two years. For those of you who may or may not know, I’m a blue belt. ^_^

One thought on “Orkut is #1 Social Network in Brazil, not Facebook.”