Facebook is the most popular service used with AddThis.

I was playing around with our site, and I came across an old blog from 2007 talking about Facebook and it’s growth. It sounds kind of silly now, but 2 years ago, no-one would have known Facebook would be the largest social network ever. Well, actually, we knew about Facebook’s growth because of our data… but we only published our insights in blog posts. Now we have a new Service Directory that can show social network trends like you’ve never seen them before. 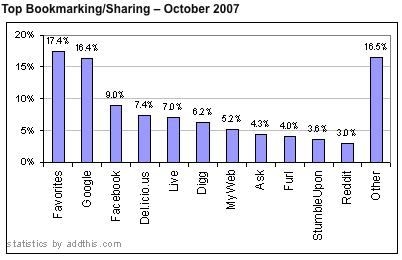 In October 2007, Facebook was part of the long tail services used to share with on AddThis. This graph doesn’t include Email, but at the time I believe Email was the #1 sharing service used. Since then, Facebook has grown from 9% to 31%â€”Facebook makes up nearly 1/3 of the sharing on the AddThis platform. It has simply been the fastest growing service in the last two years. 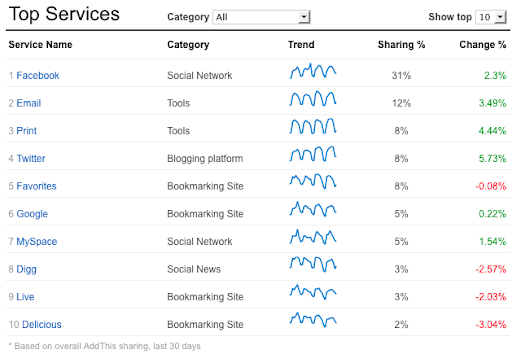 This is a snapshot of the new Service Directory Trends from February 2010. Is there anything that can beat Facebook, or have they grown to far and too fast for any other social network to keep up with? Obviously, there’s a home for special niche social networks like Orkut in Brazil (the #1 social network there), but is there anything in the horizon that can even come close? Twitter has grown, but it’s on lower growth trajectory.

What will you predict will happen in the next 2 years? Check out addthis.com/services and share your own insights. If you were to start your own social network, how would you compete with the big boys/girls?

One thought on “Facebook is the most popular service used with AddThis.”